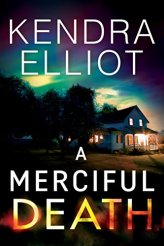 Mercy Kilpatrick, an experienced FBI Special Agent, is called upon to return to the community where she grew up to investigate the murders of two men she once knew. She was raised to be prepared for the worst that could happen to society, but the society of her own family deserted her when she most needed their support. Fifteen years before, she left town at the age of eighteen and built a life for herself, apart from those she loved. Mercy hides her estrangement from her parents and siblings from her FBI partners, making her return doubly awkward because she’s on edge, nervous about being recognized and probably shunned. When she meets the new Chief of Police, Truman Daly, they begin to work together comparing notes of past and present. It soon becomes clear that the very events that drove her away in the first place have an intrinsic connection to the current victims, one of whom was Chief Daly’s uncle. Mercy has never told anyone the full truth behind her reasons for leaving home and family. But knowing Truman Daly has as much at stake when it comes to solving the mysterious links, she wants to come clean with him, but he’s a lawman, too, so she doesn’t dare.

Ms. Elliot paints a vivid picture if life in a “prepper” community, and the attendant stresses that lead to inevitable conflicts between different factions with the same goal in mind, but whose methods are at odds. Set in the countryside if eastern Oregon, this story brings to life the sights, sounds, and smells of an area she clearly loves. Highly recommended for fans of both mystery and romance novels, though the romance plays second fiddle to the crime-solving,

This site uses Akismet to reduce spam. Learn how your comment data is processed.